The River they entered at the 38th “degree”, or “parallel”, was the Illinois. Late in the summer of 1673 Marquette writes the first description of the Illinois River, Lake Peoria and the Chicago Portage (at high water):

“We have seen nothing like this river that we enter, as regards its fertility of soil, its prairies and woods; its cattle, elk, deer, wildcats, bustards, swans, ducks, parroquets, and even beaver. There are many small lakes and rivers. That on which we sailed is wide, deep, and still, for 65 leagues. In the spring and during part of The summer there is only one portage of half a league.”

A year after the explorer’s ended their journey at the Jesuit mission near Green Bay, Father Dablon reported Joliet’s discoveries in a letter to his superiors in France.  Here is Joliet’s description of the Illinois as reported by Dablon:

“The river is wide and deep, abounding in catfish and sturgeon. Game is abundant there; oxen, cows, stags, does, and Turkeys are found there in greater numbers than elsewhere. For a distance of eighty leagues, I did not pass a quarter of an hour without seeing some…..Sometimes we saw the grass very short, and, at other times, five or six feet high; hemp, which grows naturally there, reaches a height of eight feet.”

"A settler would not there spend ten years in cutting down and burning the trees; on the very day of his arrival, he could put his plow into the ground.”

The land they were describing was the broad floodplains of the lower Illinois River.  Cut by the ancient Mississippi before it moved west to its present bed, like the American Bottom with which the lower Illinois shares its geological history, it is known today as some of the richest farmland in the world.

Next page: The Creek, The Portage and the Journey's End 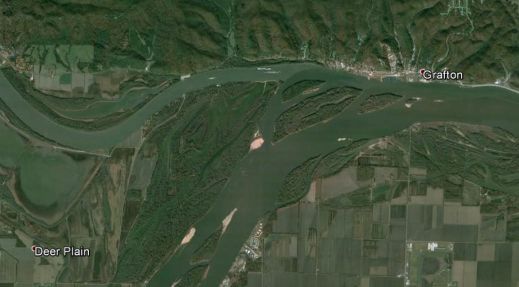