Marquette’s description of their first meeting with the Illinois, in what is today’s Iowa, continues:

“Having said this, he placed the little Slave near us, and gave us a second present, consisting of an altogether mysterious Calumet, upon which they place more value than upon a Slave. By this gift, he expressed to us The esteem that he had for Monsieur Our Governor”

While Jolliet and Marquette are remembered for determining the course of the Mississippi, they both contributed important other discoveries and recorded a variety of sociological, botanical and other scientific information.  Here Marquette describes the Calumet, or peace pipe:

“There is nothing more mysterious or more respected among them. Less honor is paid to the Crowns and scepters of Kings than the Savages bestow upon this. It seems to be the God of peace and of war, the Arbiter of life and of death. It has but to be carried upon one’s person, and displayed, to enable one to walk safely through the midst of Enemies — who, in the hottest of the Fight, lay down Their arms when it is shown.

For That reason, the Ilinois gave me one, to serve as a safeguard among all the Nations through whom I had to pass during my voyage. There is a Calumet for peace, and one for war, which are distinguished solely by the Color of the feathers with which they are adorned; Red is a sign of war. They also use it to put an end to Their disputes, to strengthen Their alliances, and to speak to Strangers.”

Later in their travels Marquette held up the calumet to stop an attack by hostile Indians who then fed and sheltered them for the night.

Next page: The Monsters 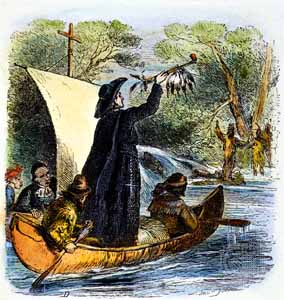