“They also said that the great River was very dangerous, when one does not know the difficult Places; that it was full of horrible monsters, which devoured men and Canoes Together”.

In addition to meeting the hostile Indians the Menominee warned Jolliet and Marquette about, the party also met the other “monsters”.

The Winged Demon
The Mascouten and Miami also warned the explorers: “that there was even a demon, who was heard from a great distance, who barred the way, and swallowed up all who ventured to approach him”.

Marquette recorded the meeting with this monster:

“While Skirting some rocks, which by Their height and Length inspired awe, We saw upon one of them two painted monsters which at first made Us afraid, and upon Which the boldest savages dare not Long rest their eyes.

They are as large As a calf; they have Horns on their heads Like those of deer, a horrible look, red eyes, a beard Like a tiger's, a face somewhat like a man's, a body Covered with scales, and so Long A tail that it winds all around the Body, passing above the head and going back between the legs, ending in a Fish's tail. Green, red, and black are the three Colors composing the Picture.

Moreover, these 2 monsters are so well painted that we cannot believe that any savage is their author; for good painters in france would find it difficult to paint so well, — and, besides, they are so high up on the rock that it is difficult to reach that place Conveniently to paint them.”

Marquette and Jolliet had discovered a painting of the “Piasa”, a mythological creature on a limestone bluff near today’s Alton, Illinois.

Next page: The Monster Missouri 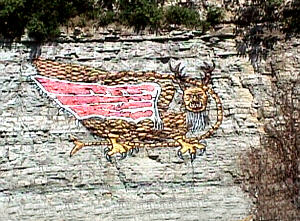