Whatever other faults LaSalle may have had, he repeatedly demonstrated his capacity for having a local, regional, continental and global vision.  LaSalle understood that if he could colonize the Mississippi Valley it would not only connect France’s colonies in North America from Quebec to New Orleans, but France’s occupation and control of the Mississippi watershed would prevent other European powers from claiming the continent.

Toward that end LaSalle obtained permission from the King to colonize the Illinois Country and Mississippi Valley and conduct the trade that would result.  He then constructed a number of small and large forts from Lake Erie to Peoria, Illinois.

His own bad luck and/or incompetence, opposition from his colonists, and finally his murder by one of them, prevented his dream of a French colony in in North America that stretched from the North Atlantic to the Gulf of Mexico, from becoming France’s reality.

Next page: The Dream Deferred 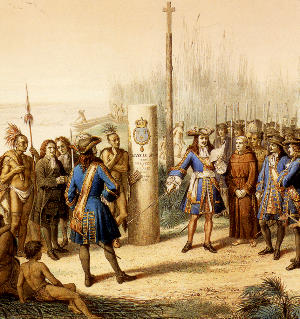