Jacques Marquette was born in 1637 to a middle class family, in a middle class city (Laon, France), in the middle of a period of religious fervor that was coupled with the thrill of discovering new worlds.

He grew up in a time when “Catholic Europe was bubbling with interest in the heroic deeds and spiritual conquests of missionaries who were enlightening the spiritual darkness of the mysterious lands of…China, Japan, India, Ceylon, the Spice Islands Brazil, Peru, the Caribbean, and Canada.”

Jacques grew up reading the Jesuit Relations.  They were published every year beginning in 1632 and sold throughout France.  Publication of these annual accounts from the Jesuit missionaries around the world continued until after Marquette’s death.

Like many Americans born during the dawn of the space age, young Jacque’s dream was to venture beyond the edge of the known world.  But instead of seeking scientific discoveries or material wealth, Jacques from an early age, wanted to save souls.

And not just any souls, not the souls of his neighbors or countrymen, Jacques wanted to venture beyond the edge of the known universe to save the souls of the poor, lost, ignoble savages and perhaps, like an astronaut, to die alone in the wilderness of a distant land in the pursuit of his dream.  And he gets his wish!

Marquette was sent by his family to the best school in his town which was run by the Society of Jesus , also known as the Jesuits.  He became a member of the Order at the age of seventeen.  He was a good student, progressed quickly and in 1666, was rewarded in with an assignment in New France.

Next page: Marquette the Missionary in The New World 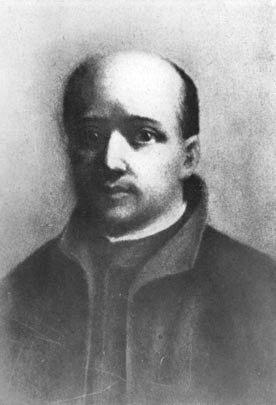