“The time of our departure soon arrived, and about noon on the 10th of September, 1818, our “brigade” left the harbor in twelve boats.”
From G.S.H. “Fur Trader & Chicago Pioneer” from “The Autobiography of Gurdon Saltonstall Hubbard  PA-PA-MA-TA-BE “The Swift Walker”

The Illinois Brigade was the last to leave the island and the residents were sorry to see the last boat depart.  The life and excitement of the summer season was over.

Some of the boats were crowded with the families of the traders who were traveling back to their winter posts.  Despite the loads, the brigade made 40 miles per day by rowing.  And when there was a steady wind, they raised square sails and made up to 75 miles a day.

The Brigade rowed south across the Straits and followed the eastern shore to the mouth of the Marquette River near the present day town of Ludington, Michigan.

“This was the spot where Father Marquette died, about one hundred and forty years before, and we saw the remains of a red-cedar cross, erected by his men at the time of his death to mark his grave; and though his remains had been removed to the Mission at Point St. Ignace, the cross was held sacred by the voyageurs, who, in passing, paid reverence to it by kneeling and making the sign of the cross.  It was about three feet above the ground, and in a falling condition.  We re-set it, leaving it out of the  ground about two feet, and as I never saw it after, I doubt not that it was covered by the drifting sands of the following winter, and that no white man ever saw it afterwards.”
From G.S.H. “Fur Trader & Chicago Pioneer” from “The Autobiography of Gurdon Saltonstall Hubbard  PA-PA-MA-TA-BE “The Swift Walker”

Twenty days after leaving Mackinaw, the brigade reached the mouth of the Little Calumet River where they met a party of Indians returning from a visit to Chicago.  During the night the Indians began a fight resulting in a number of deaths.  The Brigade moved their camp to the opposite side of the river where they spent the rest of the night preparing for their arrival in Chicago. 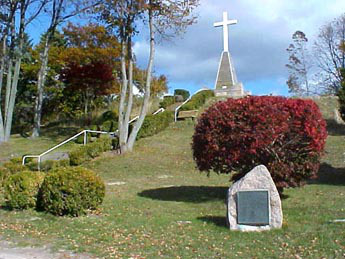